These ladies did a great job, organizing everything! Mary Killpack, Maureen Tuttle & 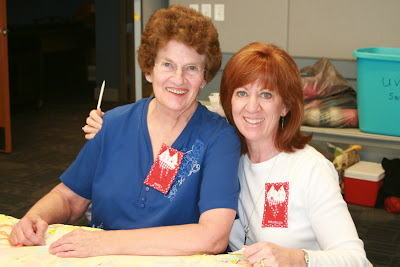 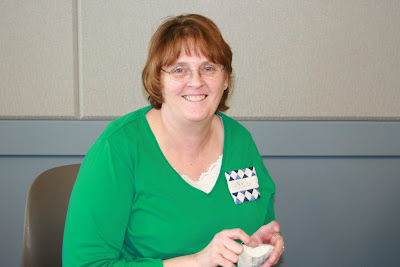 A great day of fun and service, plus, a great potluck lunch! We tied quilts for the Utah County Health Department's "Look Good, Feel Better" program. It is a program that helps local women who are undergoing cancer treatments. Some people worked on "Quilt of Valor" blocks. 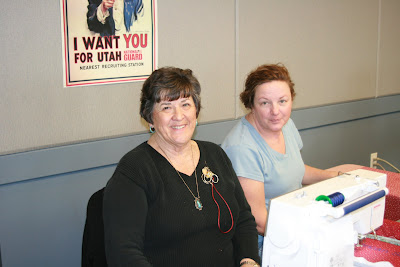 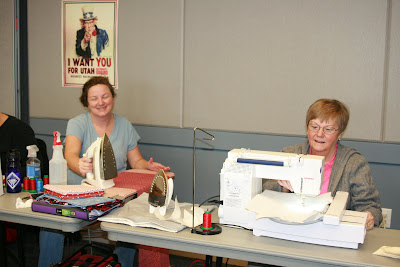 Everyone got a little gift for participating and all are entered into a drawing for this cool "quilty" cutting board! 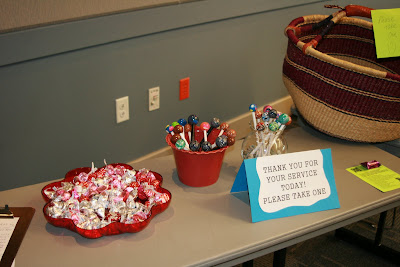 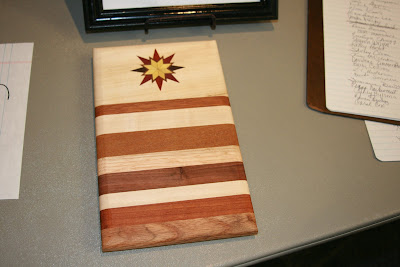 There were lots of ladies, and we all had a good time and got lots done! 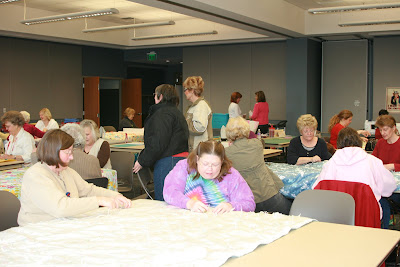 A Big Thank you to all! 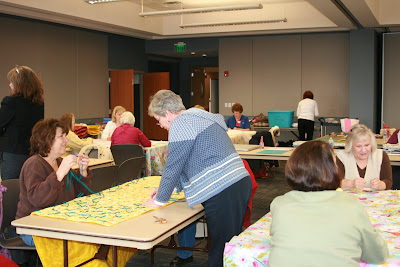 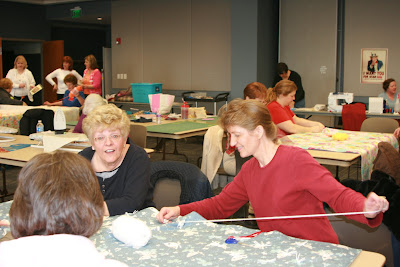 Maureen Tuttle & Mary Killpack made matching "Elf Dance" quilts, which are embellished differently. Some of the trims are from Mary's mother's (Maureen's Grandmother's) notions stash, with some of them being 60 years old! 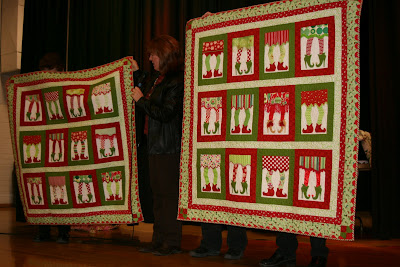 Mary Killpack displayed "Any Old Fruitcake" and "Twisted Fruitcake". Mary loves fruitcake; however, here daughter (Maureen) does not. When the Fruitcake line of fabric from Moda came out, Maureen bought some for her mother, and Mary made a more traditional quilt with starts. Then Mary found some more fruitcake fabric and made a quilt for Maureen using the Twister tool - hence, the names of the quilts! 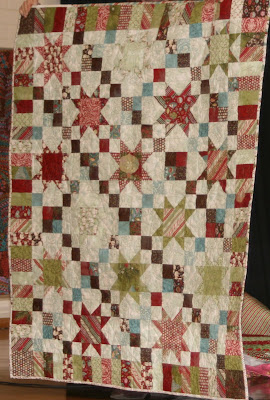 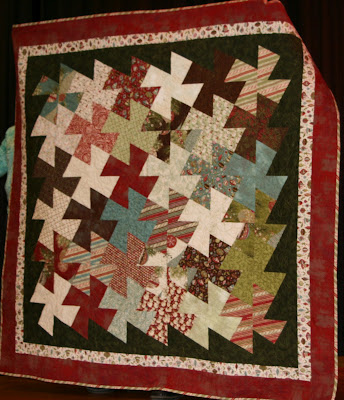 Kendra Hall showed "Tidal Pools". She loves piecing kaleidoscope blocks. This quilt was made with blue and green fabrics from Paula Nadelstern. This quilt reminds Kendra of the tide pools that she used to go see at the beach. 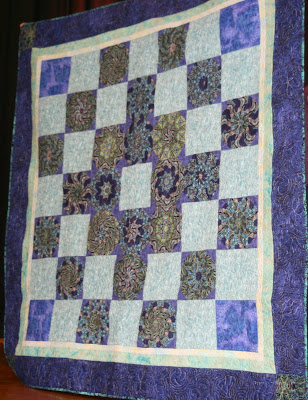 Patti Kiser rescued some "puff" quilt blocks from the 2008 July Quilt Fair Garage Sale. The colors are tabby pink, green and yellow. She pieced them together, "not puffed", adding a border she found in Moab. The extra "tucks" of the fabric made for a splendid surface texture! 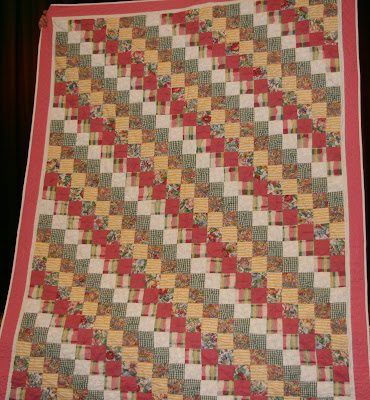 JoAnn Barr displayed "Ginger Grove", a wall hanging pattern from Sue Spargo. She bought the kit about five years ago from the Corn Wagon. The quilt is made out of cottons and wools, and includes piecing, applique, and intricate embellishments. It was hand quilted by her daughter-in-law, Lorraine Barr. 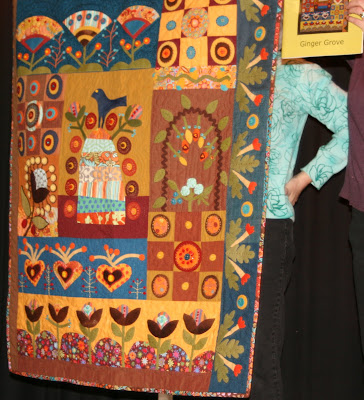 Jacque Thompson showed two quilts. "Not So Angry Birds" is a Piece of Cake pattern with brown backgrounds and bright colors for the needle-turned appliqued birds and flowers. The quilting was done by Kim Peterson. "Patriots in Petticoats" is a sampler quilt made with civil war reproduction fabrics. Each block represents some of the women who played an important part in the Revolutionary War. The blocks are set on point with log cabin accents, frames by two borders and quilted by Darcia Pinette. 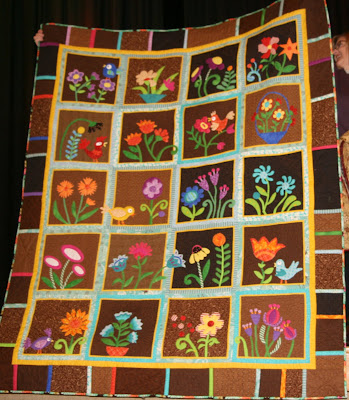 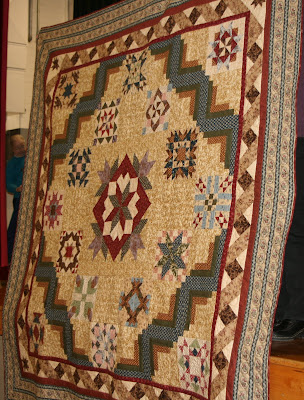 Kim McClosky is a member of "The Quilt Show", and through her membership participated in a triangle block exchange called the Sisterhood of the Traveling Triangles. Here quilt is composed of blocks from all of the U.S., Australia, England and South Korea. The quilt also contains blocks signed by Ricky Tims, Alex Anderson and Edyta Sitar. "Kaleidoscope" was designed, pieced and quilted by Kim. The back of the quilt is pink with a large breast cancer symbol. Kim gave this quilt to her sister-in-law who is waging a battle against breast cancer. 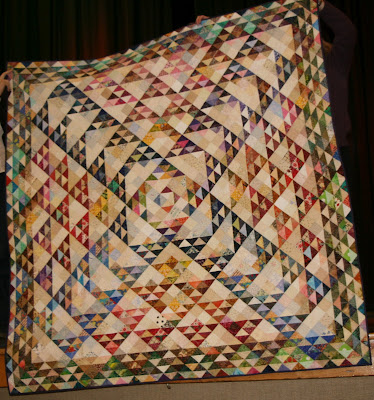 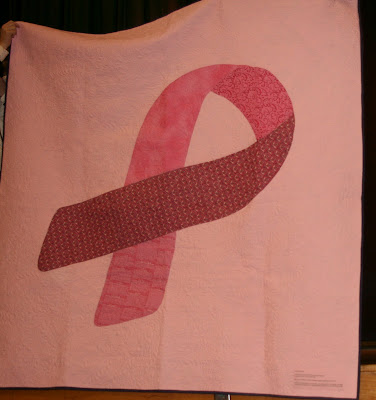 Sheila Alvord pieced a quilt from old magazine covers dating back to 1945, copied onto photo-friendly fabric, and antique embroidered dresser scarves. She started this quilt at age 85, and is now 86 years old. She also made a "Grandmother's Flower Garden" out of a box of blocks she bought for $20. She added additional hexagons in the sashing, bringing it altogether. The border is bright yellow with appliqued vines. Sheila calls this her "Rest in Piece" quilt, as this was quite an undertaking. Sheila, you are an inspiration to us all! 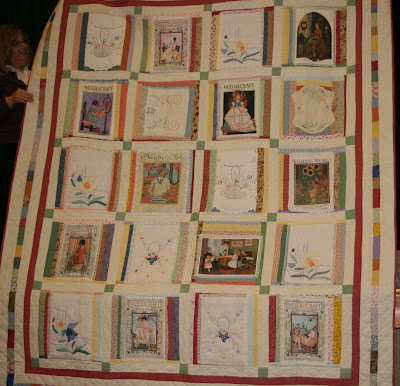 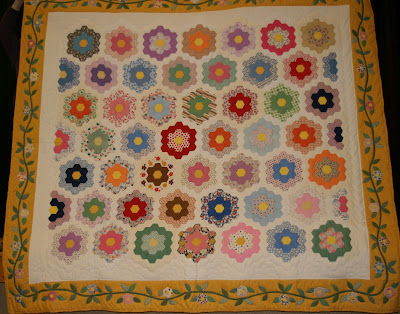 Posted by Brenda at 1:52 PM No comments: